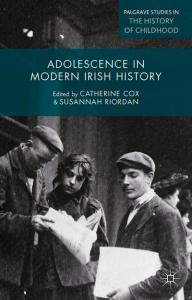 Series: Palgrave Studies in the History of Childhood

September of this year marked the timely arrival of a new and fascinating edited collection, Adolescence in Modern Irish History, published by Palgrave Macmillan – the latest addition to the publisher’s impressive and well-received series, Palgrave Studies in the History of Childhood. Edited by Catherine Cox, (Director and co-founder of CHOMI, School of History, UCD) and Susannah Riordan, (School of History, UCD), the volume is the first of its kind to address the question of adolescence in Irish history. Its chapters draw together new archival sources and research findings by nine emerging and established scholars working at the cutting edge of research into Irish adolescence.

Spanning the birth of the ‘affective revolution‘ in the early nineteenth century up to the genesis of the teenager in 1960s Ireland, the essays in this collection explore the emergence of Irish adolescence in its social, economic, political and literary contexts. Engaging with the extensive international literature on the subject, the editors argue that Irish adolescence both resembled and diverged from the British, American and continental European experience during the nineteenth and twentieth centuries. Adolescence in Ireland was particularly shaped by its demography, tied as that was to practices of late marriage, permanent celibacy, large families and the extensive emigration of young people. Coupled with Ireland’s limited industrial development and the persistence of the pre-industrial family economy, these conditions strongly informed the possibilities of Irish adolescence in terms of adolescence autonomy, educational opportunities, and employment prospects.

Naturally, the long-shadow of Ireland’s apparently troubled relationship with institutions looms large across this volume with a chapter on Irish borstal offenders, extensive treatment of industrial schools, and the confinement of unmarried mothers. Yet Riordan, at least on the question of the young unmarried mother, cautions against the often axiomatic conclusion that the carceral and unforgiving approach to problematic female sexuality so favoured in Ireland can best attributed to clerical actors. Indeed, she finds that in the newly independent Irish state of the 1920s and 1930s, a ‘social work lobby’, comprising feminist, religious and social work organisations, sought the introduction of protective legislation against the sexual exploitation of the sexually-compromised adolescent who they characterised as typically innocent and subject to seduction and betrayal by older and more powerful men. More punitive perspectives on unmarried, adolescent motherhood were instead more typically the preserve of traditional practitioners of the law and medicine.

Catherine Cox, Director and co-founder of the Centre for the History of Medicine in Ireland (CHOMI), University College Dublin (UCD).

‘A Sudden and Complete Revolution in the Female’: Female Adolescence and the Medical Profession in Post-Famine Ireland

The ‘Wild Irish Girl’ in Selected Novels of L.T. Meade

‘The Most Dangerous, Reckless, Passionate .. Period of Their Lives’: The Irish Borstal Offender, 1906-1921

‘Storm and Stress’: Richard Devane, Adolescent Psychology and the Politics of Protective Legislation 1922-1935

‘How Will We Kill the Evening?’: ‘Degeneracy’ and ‘Second Generation’ Male Adolescence in Independent Ireland

A Powerful Antidote? Catholic Youth Clubs in the Sixties